SPIR sequence combines features of CHESS (fat-selective RF pulse + spoiler) and STIR (inversion recovery nulling of fat signal).
SPIR stands for “Spectral Presaturation with Inversion Recovery” and is pictured right. SPIR is a hybrid technique that combines a fat-selective RF-pulse and spoiler gradient (similar to CHESS) together with nulling of the residual longitudinal fat magnetization through an inversion delay mechanism (similar to STIR).

These spin manipulations purely involve fat; the water resonance is unaffected. After a suitable inversion time to null residual fat signal, any pulse sequence can be used to image the remaining water. Typically a T1-weighted sequence is employed.

Unlike CHESS, where a 90°-pulse is considered ideal, the RF-pulse in SPIR is intended to partially or completely invert the fat magnetization. The RF-pulse flip angle in SPIR is therefore set in the 100°-180° range. Any transverse magnetization components of fat created by this RF-pulse are dephased by the spoiler gradient. The residual (inverted) longitudinal magnetization of fat is then allowed to regrow via T1 relaxation over the next 100-200 msec. MR signal generation begins when the Mz for fat is zero, so fat does not contribute to the final image. ​
Why is this extra inversion step necessary? It clearly uses up valuable time and makes SPIR sequences longer and more slice-inefficient than a simple CHESS technique.
The reason for this added complexity is that a perfect 90°-pulse (as required for simple CHESS) is impossible to achieve in practice. Due to B1 (RF)-inhomogeneities, some fat spins are flipped at angles greater or lesser than 90°. These spins continue to have longitudinal components of magnetization that are not destroyed by the spoiler gradient, and ultimately contribute undesirably to the final MR signal. By selecting a flip angle greater than 90° SPIR insures that residual longitudinal fat magnetization is inverted and then nulled during the TI interval.
The simplest form of SPIR sequence described above is most widely used on Philips scanners, where it has long been their default method of fat suppression. I have been told Philips SPIR has a default RF-flip angle of about 110º. After an interactive shimming process, Philips users can then optimize the sequence by adjusting the precise frequency offset of the inverting pulse as well as the inversion time (TI). GE has similar sequence called SPECIAL (SPECtral Inversion At Lipid) that uses a flip angle closer to 100º. Other major vendors like Siemens, Hitachi, and Canon offer SPAIR pulses instead.
The SPIR technique does a reasonably good job of suppressing fat. Like other chemical-shift based sequences, however, SPIR suffers tissue-related susceptibility and dielectric effects that cause inhomogeneity of the Bo and B1 fields. This is manifest by incomplete fat suppression (and even water suppression) in certain regions of the image. 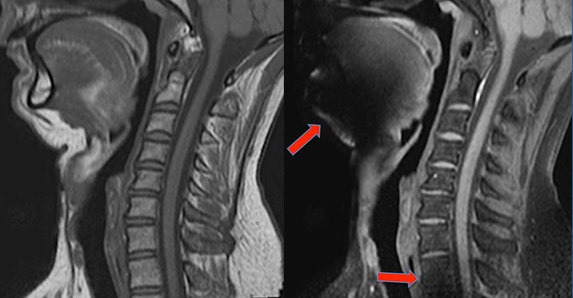 T1-weighted images without and with SPIR. Note incomplete fat suppression at edges due to inhomogeneity effects.

The reason flip angles just slightly greater than 90º are used in SPIR (instead of 180º) is so that the longitudinal magnetization of fat is not driven too far in the negative z-direction by the inverting pulse. T1-recovery takes much less time, so that the inversion time (TI) can be shortened down to the order of 30-60 msec (instead of ~150 msec which would be required if a 180º-pulse were used). The shorter TI means there will be a much smaller time and slice penalty for using the sequence.