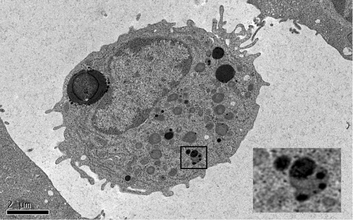 Blood monocyte 48 hrs after infusion of USPIO. Magnified inset shows USPIO within lysosome. (From Alam et al under CC-BY)
Ferumoxytol (marketed as Feraheme® in North America and Rienso® elsewhere) is an ultrasmall superparamagnetic iron oxide (USPIO) approved for intravenous treatment of iron-deficiency anemia associated with chronic renal disease. Each particle consists of a core of approximately 2000 magnetite (Fe3O4) molecules surrounded by a carbohydrate (polyglucose sorbitol carboxymethylether) coating, and measures 17-21 nm in diameter. Because it has properties similar to previously approved but no longer commercially available USPIOs, ferumoxytol in now being used "off-label" by many MR centers for imaging of the liver, lymphatic system, bone marrow, inflammatory diseases, tumor necrosis, perfusion imaging, MR angiography, cardiac viability, and plaque characterization.
After intravenous injection, ferumoxytol has a long intravascular half-life (~14.5 hrs) and initially behaves as a blood-pool agent. (Interestingly, ferumoxytol was originally developed by AMAG Pharmaceuticals as an intravascular MR contrast agent, but the company instead decided to market it for treatment of anemia!) Over several hours to days, ferumoxytol leaks out of the vascular system and is taken up by macrophage-like cells of the mononuclear phagocytic system (MPS), also known by the older term reticulendothelial system (RES). Over the next week the carbohydrate coating is broken down by lysosomes to release elemental iron. The iron then is either stored intracellularly as ferritin/hemosiderin or shuttled to plasma transferrin for ultimate incorporation in hemoglobin. In the liver it is believed that the free iron released from Kuppfer cells is transferred to hepatocytes for long-term storage, where it may remain visible on MRI in some patients for up to a year.
Ferumoxytol produces both T1 and T2 relaxation at levels 10-20 times that of an equivalent dose of gadolinium contrast. At 0.5T, for example, the R1 and R2 relaxivities for ferumoxytol are 38 and 83 L/mmol-s, while those of Gd-DTPA are only 3.8 and 4.1 L/mmol-s. Both T1 and T2 shortening may be exploited as shown in the contrast-enhanced MRA's below. 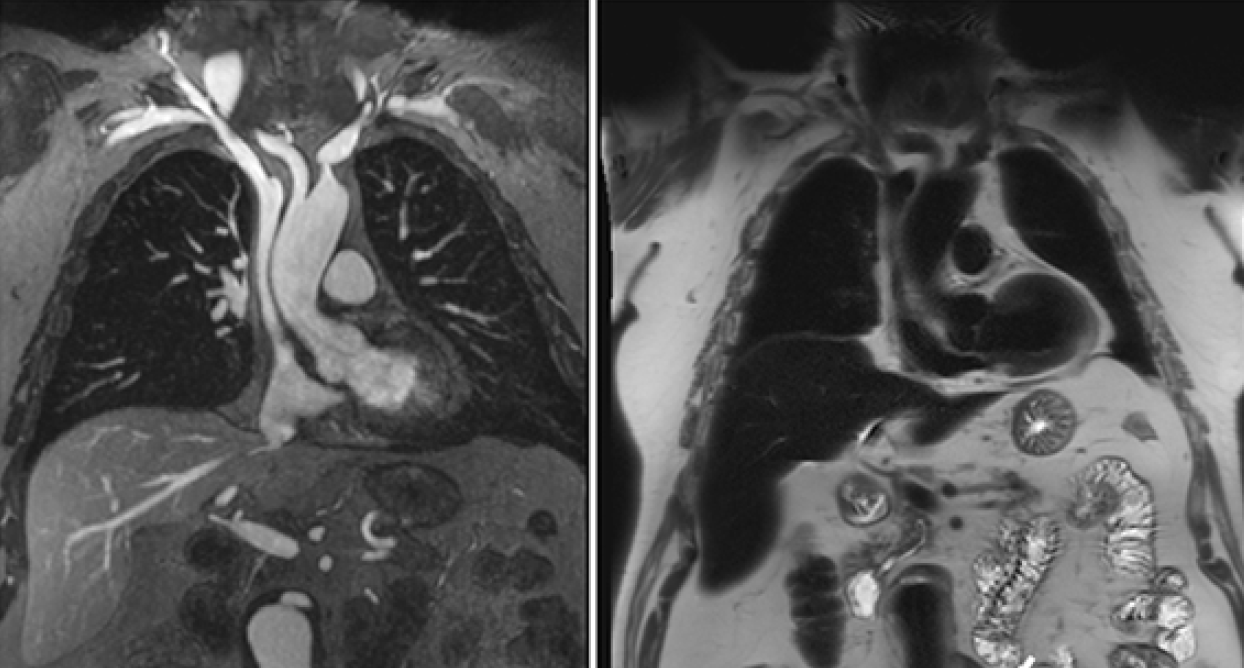 Single Shot T2-weighted FSE imaging of the upper abdomen several months before (left) and after (right) parenteral administration of ferumoxytol for anemia. Note decreased signal of liver (L), spleen (S) and cluster of lymph nodes (N and arrow) due to iron retention in these structures. (Adapted from Schiede under CC-BY).
To minimize contrast-related adverse reactions, a smaller than therapeutic dose of ferumoxytol, highly diluted, should be administered slowly by intravenous injection. Please see the Advanced Discussion for more information on dosing and patient management should ferumoxytol contrast be administered.

Use of ferumoxytol is currently limited to patients with known contraindications to gadolinium contrast agents, such as severe renal insufficiency or allergic reactions. Of course, it should not be given to patients allergic to IV iron products or iron overload states.

The most common reactions, occurring in less than 2% in aggregate, include hypertension, nausea, flushing, backache, pruritus, headache, and vomiting. There is no evidence that ferumoxytol causes renal injury as primary excretion is through the liver and bowel.

Feraheme, the commercial version of ferumoxytol in the USA, is marketed as a single-dose 17-mm vial containing 510 mg of iron and costs approximately $700. Generally no more than a half-bottle is used for imaging. The typical dose is 3 mg ferumoxytol/kg of body weight, with a range of 1-5 allowed. It should be diluted in a 1:4 ratio with normal saline and injected by slow IV infusion over 15 minutes. Vital signs should be measured before, 5 and 30 minutes after administration of ferumoxytol. It is advised that patients be observed an additional 30 minutes in the MRI center after their exam is completed. The need for a slow infusion is highlighted by the FDA “black box warning” issued in 2015, resulting from several deaths and severe reactions to the rapid administration of the drug as a therapeutic agent. See package insert in References for more details.