Questions and Answers ​in MRI
Read MR Safety Disclaimer Before Proceeding
(Endo)tracheal Tubes
"Conventional" endotracheal tubes (ETTs) are made almost entirely from plastic and can be considered safe for use in the MR environment. Those with inflatable cuffs, however, are technically classified as "MR Conditional" because they contain a tiny metal spring in the pilot balloon valve (where air for the cuff is injected). The valve should be taped down to the Y-connector of the ventilator circuit at least 3 cm away from any area of imaging interest (to avoid susceptibility artifact). The pilot valve springs of several newer tubes are non-ferromagnetic, reducing or eliminating such artifacts.

Wire-reinforced cuffed endotracheal tube.
"Reinforced" ETTs contain a metal coil (usually stainless steel) spirally wound in the wall of the tube to prevent kinking. Most manufacturers have declared their models to be "MR Unsafe" but some brands are rated as "MR Conditional". If using such a conditional ETT, the airway should be fixed properly in place with adhesive tape, cloth tape or other appropriate means to prevent movement or dislodgement before entering the MR environment. Expect a large artifact over the neck and upper chest from the reinforcing wire. 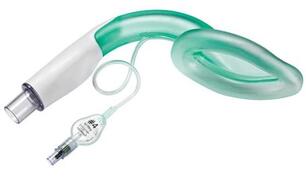 Laryngeal Mask Airway (LMA)
Extraglottic Airway Devices
​
Extraglottic airway devices, more commonly known under their trade name, Laryngeal Mask Airways (LMAs), are an alternative to tracheal intubation, especially in children undergoing MRI. They are inserted orally after induction of general anesthesia and fit tightly over the top of the larynx and pyriform fossae. MR safety issues mirror those of ETTs, depending on their composition. Most LMAs are all-plastic with just a pilot valve spring, so are (trivially) "MR Conditional" while some (uncommon) wire-reinforced models are rated "MR Unsafe".
Because LMAs are much larger than ETTs, they significantly distend the hypopharynx when in place. As such, radiologists should be aware that LMAs produce significant anatomic distortions in this region and can compress or displace mass lesions. 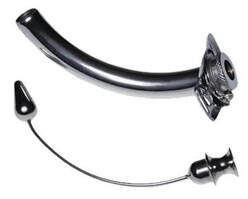 "MR Unsafe" Jackson stainless steel tracheotomy tube with obturator
Larynx/Laryngectomy Implants and Devices
​
​The MR safety of tracheostomy and laryngectomy tubes depends on their composition and design. Stainless steel tubes like that pictured right are, of course, contraindicated. All plastic tracheostomy tubes are "MR safe" (unless they contain a spring-loaded pilot cuff valve, which should be taped away securely as with conventional cuffed ETTs). As with ETTs, the declared safety of wire-reinforced tracheotomy tubes is largely dependent on the risk-tolerance of the manufacturer. Some tubes are now reinforced with titanium rather than stainless steel resulting in considerably less susceptibility artifacts over the lower neck.

Laryngectomy accessories (used by patients with permanent stomas) include short, uncuffed LaryTubes™, base plates, buttons, studs, covers, and HME (Heat and Moisture Exchange) filters. Except for certain tracheostoma speech valves described below, essentially all wearable laryngectomy accessories are made of polyurethane or soft silicone and considered "MR Safe".
Voice prostheses are short tubes with flanges placed between the trachea and esophagus to allow speech in laryngectomy patients. The devices typically contain a one-way flap valve that prevents esophageal contents from entering the trachea. The patient speaks by exhaling while temporarily occluding the tracheal stoma, thus opening the prosthetic valve and allowing air to enter the pharynx and mouth for speech. Most voice prostheses are made entirely of plastic and are "MR safe". Others, like the Blom-Singer® Advantage (Inhealth Technologies), contain a titanium valve and are "MR Conditional". The Provox® Activalve (Atos Medical) is unique in that it contains small magnets and is rated "MR Unsafe" by the manufacturer. The actual measured displacement forces at 1.5T are actually minimal, however, and would not likely cause dislodgment.
Laryngeal stents are used for short-term stabilization after laryngeal surgery or trauma and to prevent stenosis. To my knowledge all current models are made entirely of silicone and hence "MR Safe".