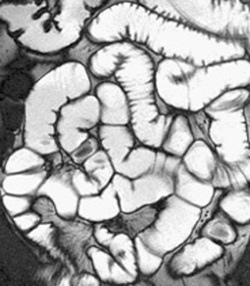 MR enterography with VoLumen
VoLumen® is a thin (0.1% w/v) barium sulfate solution with a blueberry flavoring. It contains 1.4% sorbitol as well as gum resins and barium that contribute to water retention by its hyperosmolar nature. These benefits for imaging also create problems for the patient; many complain of severe abdominal cramping, nausea, vomiting, and diarrhea after consuming this material.

Before imaging, patients are asked to drink approximately 1 L of VoLumen over a 30-45 minute period. They may also be given 10 mg of metoclopramide (to promote gastric emptying) and 0.5 mg of glucagon IV (to reduce peristalsis). Increased water within the bowel means that the intraluminal contents will have long T1 and T2 values.  In MR enterography T2-weighted ultrafast breath-hold sequences like HASTE or TrueFISP are are typically used rendering the intestinal contents bright and their walls dark.
Positive contrast agents shorten relaxation times and increase intraluminal signal on T1-weighted images. This is usually accomplished using low concentrations of ferric, manganese, or gadolinium ions. In the 1990's several of these agents were commercially available, including an enteral formulation of Magnevist® (Gd-DTPA) and LumenHance® (MnCl2). Neither agent is still in production. Some researchers have recommended the use of blueberry or pineapple juice as positive contrast agents, since both contain naturally high levels of manganese. In a different strategy, orally administered lipids with short T1 values (e.g., mineral oils, emulsions, and sucrose polyesters) have also been evaluated as positive contrast agents.
Negative contrast agents are designed to make the intraluminal contents dark, especially on T2-weighted images. This can be done by filling the bowel with diamagnetic materials (barium, kaolin) or relatively high concentrations of paramagnetic ions (where very short T2 values dominate the effects of short T1s). The use of perfluorochemicals (molecules where H atoms are replaced by F atoms) at one time seemed promising, giving rise to a now discontinued product (Imagent GI®). At present the most popular negative enteric agents use superparamagnetic ion oxides (SPIOs) to produce marked T2* shortening.

GastroMARK® is known under the trade name of Lumirem® in nine European countries.