Questions and Answers ​in MRI
Radiofrequency (RF) fields are part of the electromagnetic spectrum between about 3 kHz and 300 MHz. Electromagnetic (B1) RF-fields in this range are typically used to irradiate nuclei for induction of the MR signal.

According to Maxwell's Laws, a changing magnetic field (B) is always accompanied by a changing electric field (E), and vice-versa. So the transmitted RF irradiation in MRI necessarily includes both B and E field components, which interact not only with nuclei, but with electrons, ions, atoms, and whole molecules simultaneously. Thus a wide range of potential effects of RF-field must be considered. These are normally classified as either non-thermal or thermal.
Non-Thermal Effects
Considerable controversy​ exists concerning whether non-ionizing irradiation in the RF spectrum causes genetic, cellular, or physiologic damage unrelated to tissue heating. Theoretical mechanisms of non-thermal injury include generation of reactive oxygen species ("oxidative stress") and alteration of calcium flux across cell membranes. Most research into this topic has focused on long-term or high intensity exposures, often at frequencies higher or lower than those used in MRI. Even the greatest skeptics would likely agree that non-thermal effects, even if they exist, are unlikely to be significant in the MRI setting. These issues are discussed in more detail with extensive references in another Q&A.
Thermal Effects
By contrast, thermal effects are universally recognized to produce a large number of potential biological changes, including impaired thermoregulation, alteration of chemical reaction rates, pain, and burns. ​ Although most readers are probably aware that these effects exist, they may be surprised to learn the following:
More about the Electric Field (E)
The time-dependent E and B1 fields are related by the Faraday-Maxwell equation which can be written in differential form as: ∇ ✕ E = ∂B1/∂t. The left hand side of this equation contains a vector operator called "the curl" (∇ ✕), while the right hand side is a "derivative" (∂ /∂t), representing the time rate of change of B1. The electric (E) field can thus be visualized as "curling around" the magnetic (B1) field in concentric loops, whose properties depend on the instantaneous magnitude, direction, and time rate of change of B1. Both fields oscillate at the same frequency (ωo = 2​πfo), so the direction of E is rapidly switching from clockwise to counterclockwise in each cycle. 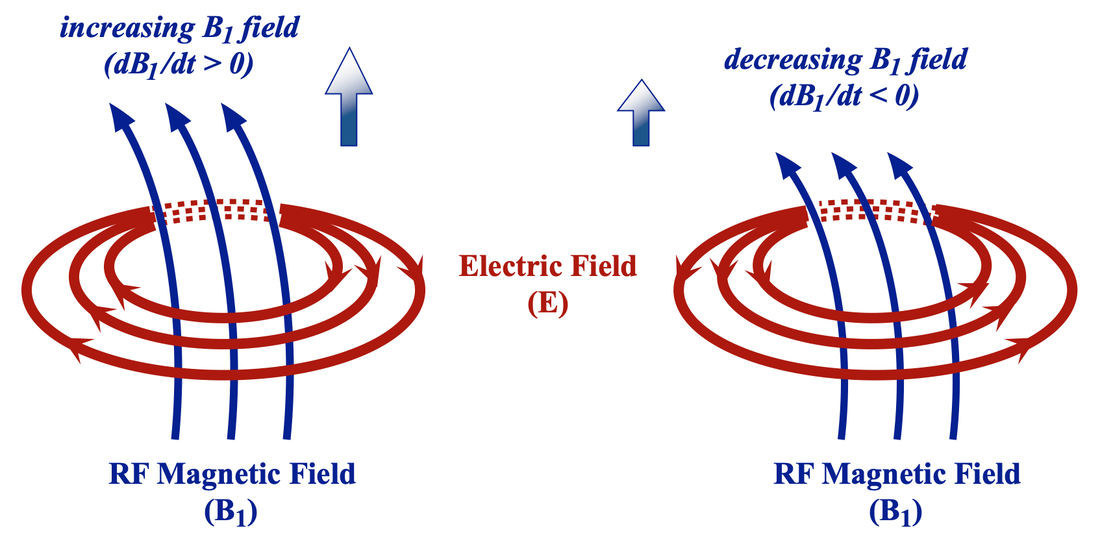 Relation of magnetic (B1) and electric (E) fields as defined by the Faraday-Maxwell equation. The lines of the E field "curl" around the B1 field. The direction of E is defined as the direction a hypothetical positive charge would move (or an electric current would flow) at a given point in space and time.
The E field deposits energy into tissues by two basic mechanisms: 1) resistive heating and 2) dielectric heating.
Resistive Heating
Pure water is a poor conductor, but biological tissues, which contain water plus dissolved electrolytes, conduct currents fairly well. The charge carriers in tissue are principally Na+, K+, Cl−, and HCO3− ions. ​Voltage gradients in the electric field accelerate these ions, imparting them with kinetic energy and creating an induced current. When these charge carriers collide inelastically with other ions, atoms, or molecules, their kinetic energy is transferred into random vibrational energy (thermal heat). This process is analogous to resistive loss of energy in a conventional electrical circuit governed by Ohm's Law. It is therefore alternatively referred to as Joule, Resistive, or Ohmic heating.
Dielectric Heating

The water molecule is polar due to its electronegative O atom
Many molecules in the body are polar, especially water, based on its highly electronegative oxygen component. Polar molecules tend to align with an externally applied electric field. When the field changes, so do their orientations. In a rapidly changing RF E-field as exists in MRI, these rotating dipoles push and collide with other molecules, dispersing their kinetic energy as heat. This mechanism is effective over a large range of frequencies and is the same principle by which microwave ovens warm food.
The relative contributions of resistive and dielectric heating are difficult to separate out experimentally, as tissues are three dimensional and contain various components with different resistances and dielectric properties. It is generally believed that resistive heating is the more important mechanism at field strengths used in MRI, becoming progressively more dominant as radio frequencies increase.