(Diagrams from Zephyr Surgical Instruments)
Soft penile implants are paired prostheses inserted into each corpus cavernosum. They are entirely made of silicone and thus "MR Safe". 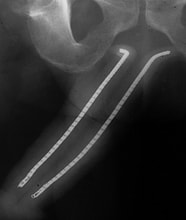 "MR Conditional"
malleable penis implant
Malleable penile implants are primarily made of silicone, but their distal portions usually contain a silver or stainless steel central core (for stability in bending and retaining shape). They are technically "MR Conditional" because of the metal, but in theory should be of no major concern for scanning.

The only exception to this rule concerns two malleable implants produced by Dacomed in the 1980s and 1990s — the OmniPhase and DuraPhase  — both with an appreciable amount of metal, including an adjustable-length tensioning cable connected by springs at each end mounted in metal housings. Although no adverse patient experiences have been reported, in vitro testing demonstrated appreciable magnetic deflection occurs at 1.5T.  While the displacement force was not deemed medically dangerous (considering how these devices are used!), it is of sufficient magnitude that patient discomfort could potentially occur. The common wisdom has thus been to avoid MRI in patients with these two rare legacy implants unless medically necessary.
Inflatable penile implants account for over 90% of currently implanted prostheses. They should perhaps better be called "hydraulic" implants, because the "inflation" is produced by manually pumping sterile saline from a reservoir into the cavernosal components.  Nearly all of the commonly used implants (e.g., AMS 800, Coloplast Titan, Zephyr ZSI 475) contain small amounts of metal in the form of rear tip extenders, connectors, or springs within the scrotal pump valves. They are thus of no concern to scan as long as their specific "MR Conditional" rules are followed.
.