Questions and Answers ​in MRI
Read MR Safety Disclaimer Before Proceeding
Typanostomy Tubes
Tympanostomy (ventilation) tubes are devices placed through a surgically created hole in the eardrum to allow drainage of middle ear effusions and to equalize pressures between the middle and outer ear. They are commonly referred to as PE Tubes (where PE = "pressure-" or "pneumatic-equalizing").
The overwhelming majority are made of fluoroplastic, polyethylene, or silicone and are therefore MR Safe. A small number of metallic tubes made of titanium, gold-platinum, or gilt silver exist; these are considered "MR Conditional."

MR Unsafe tympanostomy tubes
Only a tiny fraction of tympanostomy tubes are deemed "MR Unsafe", specifically a group of four devices made by Kurz Medical (Dusslingen, Germany). Three of these are "Tuebingen-type" collar-button-style tubes with a ferromagnetic stainless steel wire (the latter component making the device "unsafe"). The fourth is the so-called "Minimal-type" composed of gold-plated ferromagnetic stainless steel and intended for short-term use.
Ossicular Implants
The middle ear contains three bony ossicles (malleus, incus, and stapes) that mechanically transmit vibrations of the eardrum to the inner ear where sensorineural hearing occurs. A number of implants are available to replace individual ossicles (such as those affected by congenital anomaly, infection, or trauma). Some prostheses supplant two or more ossicles simultaneously: the PORP (Partial Ossicular Replacement Prosthesis) replacing the malleus and incus (but not the stapes); and the TORP (Total Ossicular Replacement Prosthesis) that replacing all three.
Fascinating details of the story are recounted by Fritsch in the References. Briefly, in 1987 the manufacturer mistakenly produced 28 lots of McGee prostheses out of ferromagnetic (instead of the usual nonferromagnetic) stainless steel ingots. A worldwide recall was initiated and 64 patients were identified who had been implanted; all were issued warning cards not to undergo MR imaging. Of the several patients scanned before receiving the warning, only one documented case of hearing loss secondary to magnetically induced movement of the implant occurred. No other incidents have been reported in the last 30 years.
Active Middle Ear Implants
Electromagnetic force transducers placed in the middle ear have been developed to augment sound wave pressure and frequency response of the conductive chain. Worldwide there are four currently marketed devices in this category, two "MR Unsafe" and two "MR Conditional". 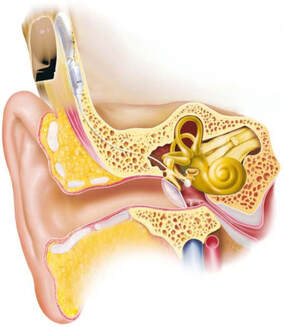 "MR Conditional" Vibrant Soundbridge™ System
The Vibrant Soundbridge™ System (Med-EL) consists of 1) an external audio processor containing a magnetic microphone; 2) an adjacent subcutaneous receiver coil and circuitry transmitting pulses along a wire to 3) a vibrating magnetic transducer in the middle ear. The transducer can be attached to an ossicle/PORP/TORP or placed in the round window niche. Both the original version of the Soundbridge and its successor (Model 502) are considered "MR Unsafe". (Clinical MR testing of the 502 model, initially thought to be safe from in vitro studies, resulted in discomfort and dislocation of the transducer in several patients). Following redesign the new version (Model 503) is now deemed "MR Conditional" at 1.5T with no adverse effects noted in clinical trials to date. Note that the magnets in both the audio processor and transducer create substantial artifacts, limiting evaluation of the temporal bone and adjacent brain.