Questions and Answers ​in MRI
You are not alone. The effect of object shape is far more complex than most people have ever imagined!
Diamagnetic, paramagnetic, or weakly ferromagnetic materials
Objects composed of materials with small susceptibilities (i.e., χ < 1), including most surgical stainless steels and non-ferrous metals such as tin, aluminum, copper, or lead are only minimally displaced by an external magnetic field and pose no dangers as projectiles. Any shape effects on their magnetization are largely irrelevant and may be disregarded.
As a result of this process, an object composed of moderate to strongly ferromagnetic material essentially becomes its own "little magnet" whose ends can be thought of as north and south "poles".  These "poles" represent an accumulation of imputed magnetic charge density at the ends of the object where there is an abrupt magnetic field discontinuity (i.e., where M goes from a positive value inside the object to zero immediately outside). An internal demagnetizing field (D) is thereby created, running from the object's north to south poles opposite to the direction both M and Bo.  Provided the object is homogeneous and responds linearly to small magnetic field changes, the demagnetizing field (D) is generally assumed to be proportional to M in each direction, related by a constant of proportionality between 0 and 1 known as the demagnetization factor (N).  Specifically, D = −NM.
By opposing Bo, D reduces the effective magnetic field inside the object, but because of its relatively small size, does not significantly affect M. The volume magnetic susceptibility (χ), defined as the ratio between M and the field intensity, is correspondingly reduced to an apparent susceptibility (χapp) given by

Note that for strongly ferromagnetic materials (those with χ >> 1), the dependence on χ disappears, leaving χapp = 1/N ​as an approximation.
An important corollary of this result is that for a ferromagnetic material, the external field strength (Bext) needed to reach critical magnetic saturation (Bsat) is much smaller than expected.  Specifically,

Consider, for example, a sphere of silicon steel with Bsat = 2.0 T brought near a 1.5 T MR scanner. The demagnetization factor for a sphere is ⅓ in each direction, so the sphere will become completely magnetized when the external field (Bext) reaches N ​• Bsat = (⅓)(2.0) = 0.67 T.  Surprisingly, the sphere has reached its full (2.0T) saturation magnetization while still in the fringe field of the 1.5T scanner! Actually this should not come as too big a surprise because the common layman's description of ferromagnetic materials is that they tend to "concentrate" the lines of external magnetic fields thereby increasing magnetic flux density within them.
In general N and χ are not a single numbers, but 2nd order tensors (arrays of values corresponding to different directions). For symmetric 3-D forms like ellipsoids, it is possible to select a coordinate frame aligned with the principal axes of the body resulting in three demagnetizing factors, Nx, Ny, and Nz, corresponding to each cardinal direction. These are all dimensionless numbers between 0 and 1, having the additional property Nx + Ny + Nz = 1.
Predicting Demagnetizing Factor(s)
The demagnetizing field (D) is strongly dependent on the shape and orientation of the ferromagnetic object in the external field. Calculation of D for a given object typically requires extensive computer simulations, but a few exact solutions are possible for simple geometric shapes. Below are computed demagnetization factors (N) in the Bo-direction. What trends do you notice? 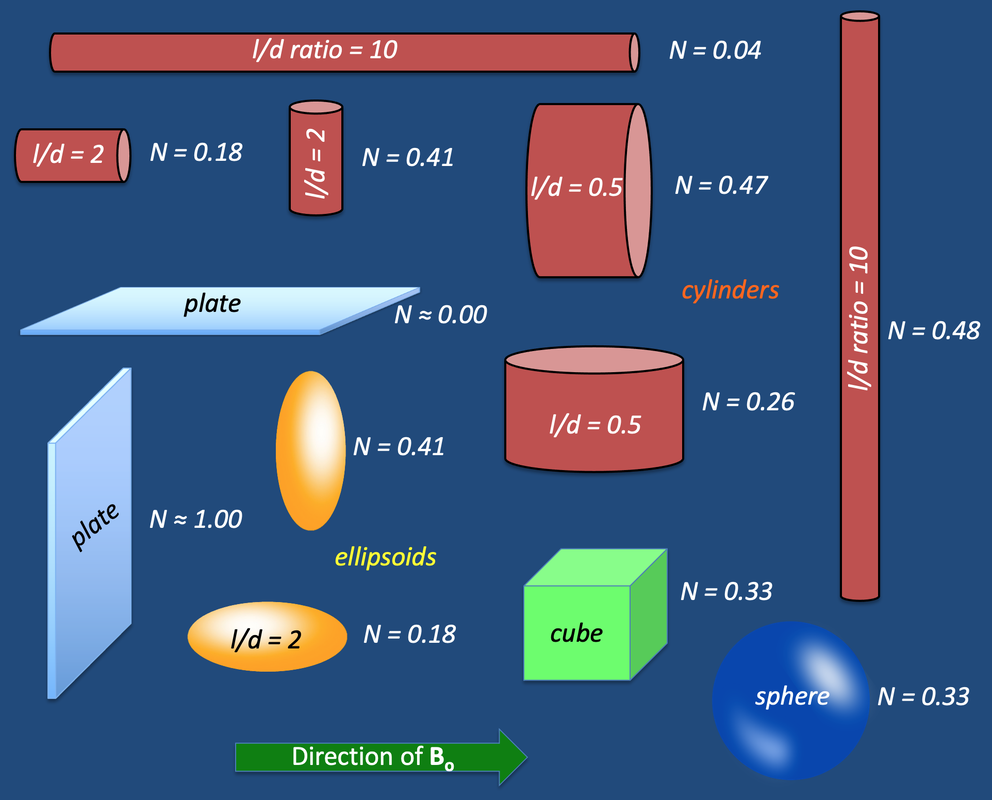 Demagnetizing factors (N) along the direction of the main field for various simple homogeneous objects.
Note that objects with the highest N-values are those that have a large relative surface area facing in the direction of Bo. Such an object is typified by the thin vertical plate perpendicular to Bo, which has N ≈ 1.00 (the highest possible value). Conversely, when the plate is turned by 90º, N ≈ 0.00 (the lowest possible value). The same principle is demonstrated by the various ellipsoids and cylinders illustrated. 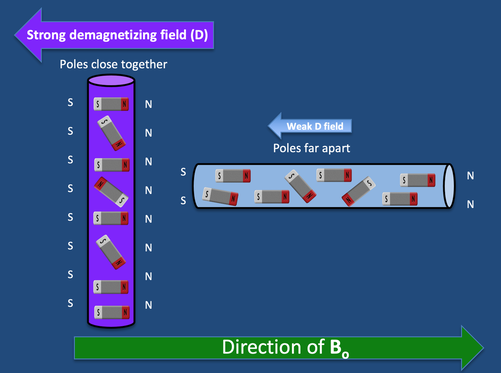 So why does this occur? The reason is that for relatively thin objects with their largest areas facing Bo, the virtual north and south poles on their surfaces are close together; hence the demagnetizing field (D) is very strong. Conversely, when the virtual poles are far apart (as in the light blue cylinder pointing parallel to Bo), the poles at the ends are very far apart. In this scenario, the interior N-S pairs cancel each other out leaving widely separated magnetic charge densities only at the two ends. This orientation of the cylinder thus results in a very weak demagnetizing field (D) and correspondingly small value for the demagnetizing factor (Nz).
Further information about demagnetizing factors and derivation of the equations above can be found in the Advanced Disccusion.

By definition, the magnetization M is related to the internal magnetic field (H) through the dimensionless quantity (χ) known as the magnetic susceptibility:

In diagmagnetic and weakly paramagnetic materials, H = Ho, where Ho is the external field.

In ferromagnetic materials shape plays a critical role because the internal field H is reduced by an opposing demagnetizing field (D), which for homogeneous linear materials can be written as D = − NM, where N is a direction specific demagnetizing factor.

So in ferromagnetic materials

The apparent susceptibility χapp is therefore

Dividing the numerator and denominator by χ we obtain

Thus for large values of χ (as are typically found in ferromagnetic materials), the dependence on χ disappears, with the apparent susceptibility dependent only on the reciprocal (1/N) of the demagnetizing factor.

Converting to SI units by multiplying each side of this equation by the permeability of free space (μo = 4π x 10−7 T m A−1), with Bext = μoHext and Bsat = μoMsat we obtain