Questions and Answers ​in MRI
In 1984 Dixon proposed a chemical shift imaging method using the in-phase/out-of-phase cycling of fat and water as described in the prior Q&A. In his original technique two sets of spin echo images were acquired with slightly different echo times: the first with fat and water signals in phase at the center of the echo and the second with the TE adjusted by a few milliseconds so that the fat and water signals were out-of-phase. Dixon's important insight was that the in-phase and out-of-phase images could be combined so that fat only and water only images could be created. The water-only image was thus fat-suppressed.
Dixon's idea can be explained very simply. Let IP represent the signal intensity of pixels from the in-phase image and let OP represent that from the out-of-phase image. By definition
IP = W + F
OP = W − F
where W and F are the signal contributions from water and fat, respectively. By averaging sum and difference data from each point, "pure water" and "pure fat" images could be reconstructed. Specifically,
½ [IP + OP]  =  ½ [(W+F) + (W−F)]  =  ½ [2W]  =  W     →    Water only image
and
½ [IP − OP]  =  ½ [(W+F) − (W−F)]  =  ½ [2F]  =  F     →    Fat only image
Initial implementations of this technique were not successful, however, because the 2-point Dixon method required assumptions of perfect Bo homogeneity with no significant local susceptibility effects. During the 1990s numerous modifications of the Dixon technique were proposed, including 3-point methods (Glover), echo-amplitude modulation, RF-phase alternation, direct phase encoding, orientation filtering, polynomial fitting, and correction for chemical shift misregistration.
It was not until the early 2000's, however, with modern magnet design and shimming techniques, that the Dixon method has experienced a renaissance. Even better algorithms have been developed including Scott Reeder's 3-point IDEAL (Iterative Decomposition of water and fat with Echo Asymmetry and Least-squares estimation), now a GE product. GE also has a faster 2-point Dixon method called "Flex" that can be appended to various sequences (e.g. "LAVA-Flex" and "VIBRANT-Flex", rapid 3D-GRE sequences that provide fat-water separated images for dynamic contrast-enhanced studies).

Regardless of the details, current Dixon-type sequences all produce four sets of images as shown below: water only, fat only, in-phase, and out-of-phase. The fat-only images offer the potential for fat-quantification. A minor disadvantage is an increase in minimum TR value (required to allow time for collection of the multiple echoes). 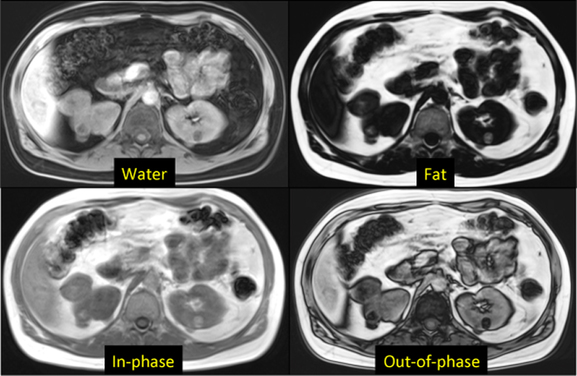 Although generally better than CHESS/Fat-Sat sequences, modern Dixon methods still have their limitations, particularly in highly inhomogeneous areas like the neck and around metal hardware. A curious artifact occasionally occurs wherein the mathematical computations will converge to the wrong substance, producing a fat-only image when a water-only image is desired. An interesting example of this so-called "fat-water swap" is shown below.

Failure of local convergence in IDEAL sequence with fat-water swap.
The normal left kidney has been mistakenly identified as composed of fat rather than water.

Newer processing techniques for the Dixon method may reduce or eliminate phase-induced fat-water swaps in the future. Seed-growing algorithms have been developed that connect high-confidence areas of water or fat signal with neighboring areas which may falsely converge to the wrong substance.