Questions and Answers ​in MRI
A relative large number of intracranial diseases can show restricted diffusion and may therefore appear bright on diffusion-weighted images. An incomplete listing by category of disease is shown below, with the most common examples highlighted in red:

The mechanisms responsible for restricted diffusion are incompletely understood and depend on the particular disease being considered. For many disorders several processes may act in concert to reduce the ADC.
Cerebral Infarction
Restricted diffusion typically occurs within 30-120 minutes after a cerebral infarction, returning to normal by 10-14 days. The principal mechanisms are thought to be:
Neoplasms
Abscess/Empyema 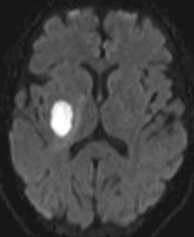 Cerebral abscess
Bacterial abscesses and empyemas reliably demonstrate restricted diffusion, and DWI has proved useful in distinguishing abscesses from necrotic tumors, resolving hematomas, and other fluid-filled cavities. The restricted diffusion in abscesses is thought to be due to the presence of viscous fluid containing cellular debris, bacteria, inflammatory cells, and mucoid proteins. Animal models have shown an inverse correlation between cellular density and ADC. And from the Stokes-Einstein equations diffusivity is inversely proportional to viscosity. As treated abscesses mature, central liquifaction occurs and T2-"shine-through" gradually replaces the ADC-driven high signal on DW images.
Toxic/Metabolic/Demyelinating