Questions and Answers ​in MRI
Read MR Safety Disclaimer Before Proceeding
Yes. Several immediately come to mind.
Recently magnetic artificial eyelashes have become available which constitute a potential MR safety hazard as well as a source of artifacts. Instead of glue, the user paints on a black eyeliner containing ultrafine magnetic particles. The lashes themselves contain thin magnetic strips at their bases to attach to the lids. Both the lashes and eyeliner should be removed prior to imaging.
Artificial Lenses
Virtually all intraocular lens (IOL) implants are made entirely of plastic or silicone, and thus present no safety concerns in the MR environment. In a few older models, metallic loops made of platinium, iridium or titanium may be attached to the lens for suturing purposes; however, all tested to date have demonstrated no significant heating or displacement at field strengths up to 7.0T. One relatively new complex IOL, the implantable miniature telescope, is considered MR Conditional because it contains a small stainless steel part in its center, so there are restrictions on maximum field and gradient strength.
Eyelid Weights and Springs
Internal palpebral weights made of gold, platinum, or platinum-iridium and are inserted in the pretarsal space of the upper lid to passively assist with lid closure in patients with facial nerve palsy. Although most are probably safe even up to 7.0T, some are labeled MR Conditional by manufacturers (out of an abundance of caution, I suppose). Externally applied weights are also available, such as the Blinkeze™ plate held in place by an adhesive strip. Even though made of (non-ferromagnetic) tantalum, such external weights should be removed prior to MRI to eliminate the possibility of skin burns.
Glaucoma Devices 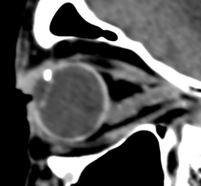 Metal EX-PRESS glaucoma shunt
Implanted glaucoma devices are used to reduce intraocular pressure by removing aqueous humor from the anterior chamber of the eye. They are virtually all constructed out of silicone or plastic and are considered MR Safe (with two exceptions):

​The first exception is the metal EX-PRESS Glaucoma Filtration Device, a 2-3 mm long pointed stainless steel tube that is implanted under a scleral flap. The tube drains fluid from the anterior chamber into the intrascleral space. The EX-PRESS mimics a foreign body on x-ray and creates a local artifact on MR. It is considered MR Conditional up to 3.0T with the additional caveat that the manufacturer does not recommend scanning in the first 2 weeks post implantation.

"MR conditional" Hydrus® microstent
The second exception is the Hydrus® Microstent (Ivantis), a crescent-shaped device made of non-ferromagnetic nitinol (an alloy of nickel and titanium) placed in Schlemm’s canal near the corneal-iris junction. (Schlemm’s canal is a lymphatic-like vessel in the deep cornea whose function is to drain aqueous humor from the anterior chamber into the episcleral blood vessels). Like the EX-PRESS Device, the Hydrus is MR Conditional up to 3.0T.
Eye Prostheses
As a warning, a small number of legacy MEDPOR prostheses implanted in the 2000-2010 time frame that contain a small magnet in the shell magnetically coupled to a ferromagnetic screw on the globe component. MR scanning of these prostheses is contraindicated.
Miscellaneous and Uncommon Devices