Questions and Answers ​in MRI
The principal ¹H spectral peak arising from of the normal prostate comes from citrate. Citrate is secreted by prostatic epithelial cells into ejaculatory fluid in high concentrations. Its role is not fully known, but is believed to activate sperm cells and increase their motility.
High-resolution laboratory spectroscopy reveals citrate to be an AB quartet centered at δ = 2.6 ppm deriving from its four central hydrogens.  In clinical exams this fine structure cannot be appreciated but a slightly notched citrate peak may be sometimes recognized at 3T.  ​The relative size and appearance of these peaks is strongly dependent on the pulse sequence, field strength, and TE, so care must be taken in choosing optimal parameters for the detection of citrate in clinical MRS.
In addition to the dominant citrate resonance, small peaks for choline (Cho, at δ = 3.2 ppm) and creatine (Cr, at δ = 3.0 ppm) are regularly observed in the normal gland. These peaks often appear joined, being bridged by a broad peak from polyamines (PA).
In prostate cancer, citrate levels fall (due to consumption of citrate to supply energy to proliferating cells), while choline levels increase (corresponding to increased cell membrane synthesis). This pattern is similar to the reversal of the NAA/choline ratio seen in malignant brain tumors. Additionally, cancer causes a decrease in polyamine levels, so a more obvious separation of the Cho and Cr peaks can often be observed. Jung et al have developed a 5-tier scoring system to aid with interpretation of prostate spectra and improve interobserver accuracy for the diagnosis of malignancy. 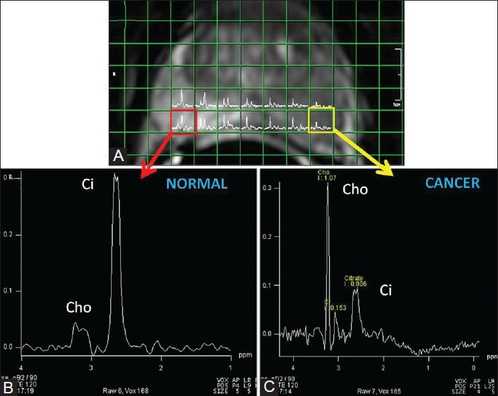 ¹H-MRS showing a normal spectrum on the right side of the prostate and cancer on the left. Note the decrease in citrate (Ci) and elevation of choline (Cho) in the cancerous side, with a Jung score = 5. Decrease in polyamines (PA) in cancer also allow better separation of the Cho and Cr peaks to be appreciated. (Modified from Sharma 2014, under CC BY license)
Knowledge of prostatic zonal anatomy is necessary to properly interpret these spectra. Specifically, the central and transition zones, anterior fibromuscular band, and periurethral tissues have much lower citrate levels than seen in the normal peripheral zone. Conversely, tissues surrounding the seminal vesicles, urethra, and ejaculatory ducts have relatively high Cho levels due to the presence of glycerophosphocholine in the the fluid they contain. The diagnostician must also be aware of other pitfalls including confounding effects of coexistent benign prostatic hypertrophy, prostatitis, lipid contamination, and post-biopsy changes on the spectra observed.

Citrate is a normal intermediate metabolite of glycolysis in the Krebs (Tricarboxylic Acid) cycle where it is normally converted to isocitrate by the enzyme m-aconitase. Zn+2 anions, present in high concentration in normal prostate, inhibit m-aconitase allowing a build-up of citrate for excretion into the ejaculatory fluid. It is believed that loss of zinc transforms normal citrate-producing cells into citrate-oxidizing malignant cells, providing the bioenergetic basis for prostate cancer.

The polyamine resonance bridging the Cho−Cr interval does not include the most famous of all the polyamines, spermine. Spermine's principal resonance is at δ = 2.7 ppm and is usually hidden by the much larger citrate peak at δ = 2.6.

The classic appearance of an AB quartet is common for molecules like citrate containing two isolated proton pairs coupled only to each other. Although the citrate molecule is symmetric, the two ¹H protons in each CH2 group are diasterotopic (non-equivalent).

The relative sizes of the 4 peaks and whether they are upright or inverted vary as a function of field strength, pulse sequence, and echo time. These interesting phenomenon occur due to mixing of energy levels between the αβ and βα quantum states and varying associated transition probabilities. Details can be found in the references below, but the practical implication is that care must be taken in selecting imaging parameters to optimize the detection of citrate for MR spectroscopic imaging.

Related Questions
How do you perform prostate MRS? Are endorectal coils required?
↑ Complete List of Questions ↑