Questions and Answers ​in MRI
Denis Le Bihan, father of modern diffusion imaging, coined the term intravoxel incoherent motion (IVIM) in the 1980s to refer to the microscopic translation of water molecules within a voxel during an MR experiment. When gradients are applied during evolution of the MR signal, IVIM causes spin dephasing and signal loss.
If the gradients are relatively strong, IVIM-induced signal losses are primarily due to diffusion — the Brownian motion of water molecules in and around cells. When weaker gradients are used, however, a second IVIM mechanism also contributes to signal loss — microcirculation of blood in the capillary network. Microscopic perfusion effects have been largely ignored in the 25 years since Le Bihan's seminal papers, but have recently enjoyed a renaissance in what is now known as IVIM imaging.
If diffusion-only effects are considered, MR signal intensity (S) relative to baseline (So) without diffusion-sensitizing gradients can be expressed as

where D is the apparent (or measured) diffusion coefficient and b is a factor reflecting the strength and duration of the pulsed diffusion gradients. Under this model, a semilogarithmic plot of signal attenuation ln(S/So) vs b should be a straight line with slope = D.
The IVIM model as originally proposed by Le Bihan et al takes into account both diffusion and perfusion effects using the following bi-exponential model 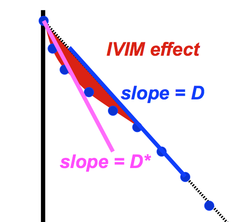 Enlarged area of graph showing D* vs D
Here f (dimensionless) is the perfusion fraction, the percent of a voxel volume occupied by capillaries. Conversely (1−f) reflects the extravascular space where only diffusion effects (with apparent diffusion coefficient D) take place. The parameter D* is called the pseudodiffusion coefficient and reflects dephasing due to perfusion in semi-randomly organized capillaries.  D* is sometimes referred to as ADCfast or ADChigh while D is sometimes called ADCslow or ADClow. Depending on the steepness of the initial portion of the curve, (which in turn depends on capillary density and perfusion), D* may be 5-10x greater than D.
By acquiring DWI images at multiple b-values and fitting the data to above equation, it is possible to estimate f, D, and D* and create maps for each. Typically between 6 and 10 data sets are obtained with b-values ranging between 0 and 1000 s/mm², with at least half the measurements performed at less than 250 s/mm².
Some interesting results of IVIM imaging have been reported for tumors of the prostate, liver, and soft tissues, where perfusion fractions have been shown to correlate with other methods of assessing vascularity. However, considerable errors occur in the estimation of D*, which I personally feel are unreliable, varying too much among centers and studies. Not only D*, but all IVIM parameter estimates are affected by motion, noise, and secretory physiologic processes (such as glandular and renal tubular flows) that cannot easily be distinguished from capillary perfusion. I thus remain a little skeptical for now as to what extent IVIM imaging will find a role in our future imaging armamentarium.