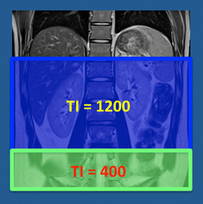 Inflow-enhanced b-SSFP using two
inversion slabs at 1200 and 400 msec
The usual imaging parameters at 1.5T have TI's in the 1000-1300 msec range. Obviously a single TI choice cannot null all tissues, but this is a compromise value that suppresses muscle and venous blood while allowing adequate time for fresh arterial blood inflow from outside the slab. For patients in cardiac failure or very slow vascular inflow due to stenoses, sometimes the TI value must be extended over more than one cardiac cycle to the range of 2000 or more.

In some cases additional obliquely oriented saturation bands may be placed over the kidneys as well. To further suppress signal from the inferior vena cava, a third inversion band is sometimes applied inferior to the larger first (blue) band at an intermediate TI value (e.g., 400-800 msec). Many variations are possible.

Inflow-enhanced balanced SSFP MRA techniques are sometimes classified as a type of arterial spin labeling (ASL) method. I do not like this classification because the fresh blood flowing into the saturated slab has not been specifically labelled by an RF-pulse as would occur in a true ASL sequence. The inflowing blood gives off a high signal because it remains fully magnetized (unlike the saturated blood and background tissue within the imaging volume). So to me this is more of an IR-based saturation technique more similar to TOF MRA than a spin-labeling technique.